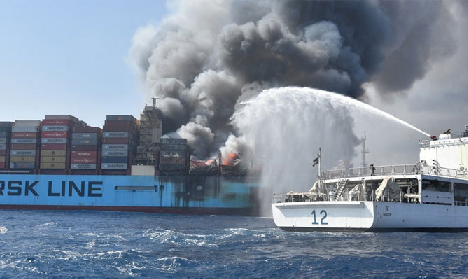 Mar 11 Update
As of 0800 UTC Mar 11, MAERSK HONAM was in vicinity 09 46N 065 54E, some 760 nm southwest of Mumbai, probably already on tow. Port of destination unknown, my guess is, it’s Mumbai.
All containers in fore section, from f’castle to superstructure, understood to be total loss, all hundreds of them. According to Indian Coast Guard officials, who’re undoubtedly, possess the information provided by Maersk, among the containers in fore section were containers with flammable liquids and solid cargoes, oxidising substances, toxic and infectious cargoes, and corrosive materials. Some cargo in one or several containers inflamed or exploded, there’s little doubt about that.
No news on missing sailors yet. Again, we’re left in mystery – what it was exactly crew were fleeing from, and were most afraid of – explosions, fire, toxic fumes, or all of it? How did seaman who died from burns get those burns? Were people sent to cargo deck and went missing, or did it happen during evacuation?
How did they escape, in life raft (s) or lifeboat? There’s one photo, understood from ICG, on which we see life raft. Did the evacuation go in orderly fashion, or was there some panic?
Those aren’t idle questions to make some kind of thriller, because as I see it, container ships, especially biggest ones, are floating bombs, with so much dangerous goods inside containers, so the safety of the crew and measures to provide it, maybe have to be reviewed. More often, than not, major fires on container ships take their toll in crew lives.

Update Mar 9 night
Two missing Filipino sailors were identified as John Rey Begaso and Janrey Genvatin, both 21 years old engine cadets from JBLFMU-Molo. According to latest updates from Indian CG, no traces yet of missing sailors.
Two offshore supply tugs were deployed for salvage, reportedly by contracted both Ardent and SMIT: MAERSK INVOLVER (IMO 9753923) and CSC NELSON (IMO 8108107). There is an AIS signal of one more tug, Dutch-flagged ZWERVER 2 (IMO 9794458), though from the looks of her she doesn’t seem to be an ocean-going tug. Indian CG ship, CG 12, is still engaged in operation.
As of 1630 UTC Mar 9, MAERSK HONAM was in vicinity of pos 09 49N 065 46E.
Fire was said to be “under control” as of afternoon Mar 9, which seem to be rather premature – no major fire on container ships, let alone Ultra Large Container Ships (MAERSK HONAM, incidentally, is the first to open ULCS major fire accidents list), was ever taken under control in just 2-3 days. One more proof to that is the fact, that no traces of missing sailors were yet found, meaning that the ship wasn’t boarded. Most probably, it’s too dangerous at present stage, with toxic fumes around and high probability of new explosions.

Update Mar 9 morning:
The missing seafarers are two Filipinos, one South African and one Indian national.
The missing Indian crew member has been identified as Sakim Hegde, one of the cooks on board, a senior official from the Directorate General of Shipping (DGS), India’s maritime regulator, said.
Twenty-three crew were evacuated from Maersk Honam to nearby vessel, ALS Ceres. One of the rescued seafarer, a Thai national, succumbed to injuries the following day.
A Thai and a Filipino sailor, were in urgent need of medical care as their conditions worsened. They were evacuated by Indian navy vessel and handed over to the Indian coast guard of Thiruvananthapuram and are now receiving medical treatment. They are accompanied by one of the evacuated Indian colleagues, who is well versed in Malayalam.
The sailors, who arrived at Thiruvananthapuram Medical College, have been identifed as Deepu Jayan (31), Alen Roy (34), a Filipino and Sukun Suven peng (36) a Thai national, a hospital release said. It was also stated that they were injured after falling from the ship.
https://www.news18.com/news/india/indian-sailor-goes-missing-thai-national-dies-after-major-fire-on-maersk-ship-1682551.html

Update Mar 8 evening:
MAERSK HONAM AIS transmitter seems to be off for the lat 12 hours – either fire somehow disabled it, directly or indirectly, or something else disabled it. No SAR tug yet visible in the area, some of the ships deployed earlier seem to be leaving the scene and resuming their voyages. The only one ship by far directly involved in firefighting, was (is) Indian Coast Guard ship GC 12 (MMSI 419001028).
Anxious shippers whose containers are on board MAERSK HONAM, are advised to attempt to find out exact location of their containers. If containers are behind superstructure and further aft, obviously they have nothing to worry about, and in all probability, won’t. If their containers are loaded in fore section, they’d better start consulting their insurers and lawyers right now, if MSC FLAMINIA fire case is of any use and example of minor shippers’ woes.

Update morning Mar 08:
One of rescued 23 crew, of Thai nationality, died of injures on Mar 7, said Maersk Line, whose website as of 0500 UTC, was up and down sporadically.
A bunch of photos sent to me by MB visitor (understood taken by Indian Coast Guard and Navy), shows burning MAERSK HONAM – fire is raging in fore section from forecastle to it seems, superstructure, with most part of the ship remaining intact.
Most probably, fire won’t spread further aft beyond superstructure, which isn’t yet on fire or devastated by fire, simply because AIS is still working – latest AIS position at 0100 UTC Mar 8 was in 10 05N 065 37E.
Three container ships are nearby, no salvage ships around yet. If fire wouldn’t spread aft and hull will hold on, most probably, salvors will try to tow her by aft to some coastal area. Weather is fine.

Update Mar 07: Not much new information appeared as of late Mar 7. According to Indian Coast Guard officials, there was a huge explosion, followed by major fire, which sprang up to ship’s bridge, some 25 meters high. Maersk Line said fire started in cargo hold, not on deck. There are no new, daylight photos, for assessment and analysis.
One MB visitor in comment revealed 4 missing crew nationalities: 3 Filipino and 1 Indian.
On a pic MAERSK HONAM position as of 1700 UTC Mar 7, the ship is drifting in southern direction.

Initial news:
Major fire erupted on board of ULCS MAERSK HONAM on Mar 6 in Arabian sea, the most detailed report was issued by Maersk Like in a Statement:

Serious fire on Maersk Line container vessel in the Arabian Sea
Published on 07 March 2018
Tuesday 6 March 2018 at 15:20 GMT, the Maersk liner vessel MAERSK HONAM reported a serious fire in a cargo hold. Enroute from Singapore towards Suez, the vessel is currently positioned around 900 nautical miles southeast of Salalah, Oman. After being unsuccessful in their firefighting efforts, the crew sent out a distress signal and a total of 23 crew members were safely evacuated to the nearby vessel ALS CERES (IMO , which arrived at the scene around 18:30 GMT. Regrettably, four crew members remain missing. The fire onboard the Maersk Honam continues and the situation of the vessel is very critical.
The container vessels MSC Lauren, Edith Mærsk and Gerd Mærsk, all enroute in the Arabian Sea, have diverted their routes and are approaching the area with expected arrivals in the early morning Wednesday 7 March local time. Weather conditions in the area are currently fair.
“The evacuated crew is obviously distressed, with two crew members currently receiving medical first aid onboard the ALS Ceres.
The nationalities of the 27 crew members are: India (13), the Phillipines (9), Romania (1), South Africa (1), Thailand (2) and the United Kingdom (1).
The vessel is carrying 7860 containers. All impacted customers will be contacted directly.